Between renewable, non-renewable and a plethora of other energy variants, sometimes it is easy to get mixed up in what “energy in Ohio” actually means. Because of that, I created these three graphs to give a quick snapshot of energy in the state.

Long thought dying and surpassed by alternative energy, coal still provides a major part in the Ohio energy landscape. A majority of net electricity generation, nearly 58 percent, is provided by coal. The energy source has long been associated with Ohio history and the continued existence of coal towns proves that. Other major players include natural gas and nuclear energy, which provide 24 percent and 15 percent, respectively.

2) Natural gas is the most-consumed in Ohio. Coal is not too far behind.

From energy consumption estimates, natural gas is the most used at 996.9 trillion btu. But in another coal surprise, the energy is not too far behind. It is the second most-consumed at 825.3 trillion btu. Behind those two are the energy sources of motor gasoline and net interstate flow of electricity.

3) Wind provides more than half of generation from renewable sources, but that’s still not a lot 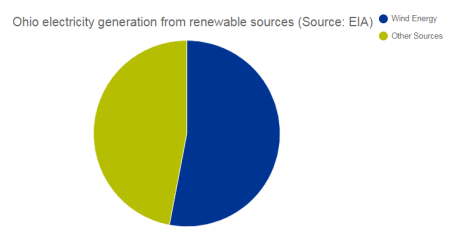