Traveling throughout Cuyahoga Valley National Park, people might come across a small town tucked away in the heart of the park — Peninsula.

Visitors are greeted by a white church and small strip of shops and restaurants. There aren’t any chain stores like Starbucks or Rocknes — it’s all locally-owned businesses with more than 22 original buildings from decades ago still standing strong.

The Cuyahoga River curves around the town and borders the park — a popular stop for hikers and bikers. Although the river has an abundance of history having just recently commemorated the 50th anniversary of “The Burning River,” Peninsula had a large part in helping the Cuyahoga River become an active route for shipping and recreation.

“The whole history of the village, even before it was a village in Native American times, can really be summed up in transportation because it being along the river, it was always a key route for transportation for the Native Americans and for the original settlers,” said Rebecca Urban, the historian and office manager for the Peninsula Foundation. “And then when they built the Ohio and Erie Canal, it became a huge booming little community there.”

“It has not changed at all, and then it has totally changed … But the goal is to maintain the town as it is.”

The foundation is deeply rooted into the town, with family members who have been in the town for generations. The group helps with education programs, as well as historic preservation.

Since its founding in 1818, Peninsula went through many different stages in its lifetime; residents made a living by working at the local flour mill in the 1800s, Urban said. But it burned down in the early 1900s, and the town had to find another way to survive.

It came back to life through boat production. More than 30 boats handcrafted by Peninsula townsfolk ended up being used in the Civil War. But after the 1980s, boat production started to become larger-scale across the nation, rendering Peninsula useless in the business.

Although those two businesses led to an increase in revenue and population for the town back then, other local attractions helped to bring in crowds, like Peninsula’s three quarries that are still in operation today.

Peninsula is solely running on its local attractions to get by, as well as festivals in the area to bring in revenue. Each year, the town hosts a Ramp Festival and a Fall Festival, allowing local business owners to set up shop along East Main. 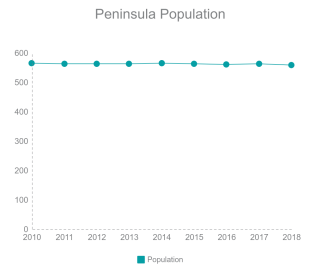 Earlier this summer, town officials announced the town is losing too much money and said 10% of the budget will have to be cut by 2023, according to the Akron Beacon Journal.

To learn more about the issue along with other aspects of Peninsula, the Environmental Reporting class reached out to Mayor Douglas Mayer, but he couldn’t be reached.

During the meeting when the announcement was made, Mayer told the Akron Beacon Journal the town plans on spending $120,000 more than brings in per year. The park attracted more than 2 million visitors in 2018, according to a National Park Service report. While many of these visitors used the village’s services, they aren’t paying for those services as taxpayers.

“So it’s just a matter of adjusting, adjusting some of the spending that they do to compensate,” said Karen Walters, the executive director for the Peninsula Foundation. “There hasn’t been any introduction of any kind of syntax or anything like that.”

Another issue is that the park’s popularity is growing much faster than the town can expand, which is posing other challenges, Walters said.

Although a plan hasn’t been announced to create the 10% budget cuts, recent developments near and around the town are giving officials hope that there will be more visitors — which means more revenue.

With the holidays approaching, the park’s Polar Express train ride has started to make it’s rounds — and tickets are sold out. The train starts in Peninsula and takes visitors around the park, giving them a chance to see it from a different perspective.

Peninsula is apart of Boston Township, which includes Boston Mills — home of the Boston Mills and Brandywine Ski Areas. The ski resorts had been purchased by Colorado-based Vail Resorts. Although no changes are expected to happen right away, local skiers are going to notice new updates in the upcoming year, according to Cleveland.com. But Urban and Walters agreed that no matter what changes the town decides to make within the village or the surrounding area in the near future to help with budget issues, nothing will take away the small-town feel.

“It has not changed at all, and then it has totally changed,” Walters said. “But the goal is to maintain the town as it is.”