As the shallowest Great Lake, Erie is also the warmest, providing a fertile breeding ground for algae. Algae has also started making its way into the Maumee river, High levels of nitrogen in the river wash out into Lake Erie and feed the algae. In turn, Lake Erie washes algae-contaminated water back into the largest watershed in the Great Lakes.

Lake Erie has struggled with algae blooms in the past. In 1972, Congress passed the U.S. Clean Water Act which banned some chemicals used by water treatment facilities which were major contributors to algae growth in Lake Erie. In 2014 algae disrupted Toledo city services, including access to potable water and medical services used for childbirth and surgery.

The 2019 Lake Erie Algal Bloom, however, was predicted by the National Oceanic and Atmospheric Association (NOAA) to be more harmful and toxic than blooms in the last few years. NOAA graphs also show greater algae density near coastlines in Lake Erie’s Western Basin.

The Western Basin serves as a primary water source for Toledo, Ohio. This year the algae bloom reached the intake pipe for Toledo’s water supply. Drinking water contaminated by algae can lead to fever, vomiting, headaches and be fatal, potentially leading to liver failure and death if not treated immediately.

SESYNC found levels of dissolved phosphorus from algae blooms are rising in the Maumee River. The study also found agricultural and urban practices “threaten ecological stability and public health for millions dependent on the
lake for drinking water, tourism, and fisheries.”

Fisheries and charter boat services have also taken an economic hit from the bloom. 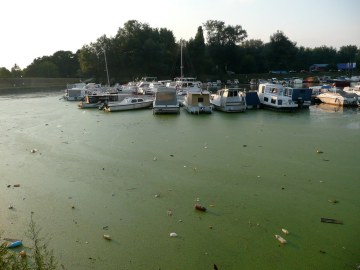 The SESYNC report quotes charter boat Captain Jim Cook, “I used to take 5-6 people out for day trips on the lake 7 days a week all summer long. Now, people are calling me up to ask how bad the water looks before they book a trip.”Cook compared the algae-contaminated water to split pea soup and said,”Who wants to pull a fish out of the water with green slime covering it?”